Advanced stack rules are in italics.

HexyGame is a collectible card game on hexagonal map. Players are taking turns. Turn has multiple phases. The player whose turn it is is called "active player".

Every deck must have at least 48 cards. You may play any number of basic bulidings and basic energy (=color= Energy). You may play maximum of 3 same rare cards, 4 same uncommon cards and 5 same common cards.

At the beginning of the game, both players shuffle their decks and draw 8 cards. If the player doesn’t like his hand, she/he may shuffle and draw one less card. Repeat this process as many times as you want.

The beginning player starts his turn in the Main Phase.

Players start with 1 on their Winning Dice.


The card while it is in hand or on the battlefield is a card. When the card has been cast (is on the stack), it's a spell. There are different types of cards (spells) in the game: board spells, enchantments and virtual spells. Board spells are buildings, creatures and artifacts. Enchantment cards are special, they must enchant some board card and they don't have points. Virtual spells are wizardries and sorceries. Board cards go upon resolution to the battlefield and when cast, must target a free hex, whereas virtual spells go directly to graveyard as they resolve. Enchantment spells must target a board card and upon resolution go under that card. When the board card the enchantment enchants gets destroyed, the enchantment is destroyed too.

Any player can discard a card to get one colorless energy to her/his Energy Pool any time.

If the last point counter (domino) is removed from the board card, the card is destroyed and is moved with all enchantments directly to the graveyard (if not stated otherwise).

You may cast non-Wizardry spells only during your turn in Main Phase if the stack is empty.

There can be a maximum of 6 points (counters, domino) on any board card if not stated otherwise.

All buildings have "Remove 2 points: add 1 point to adjacent building". 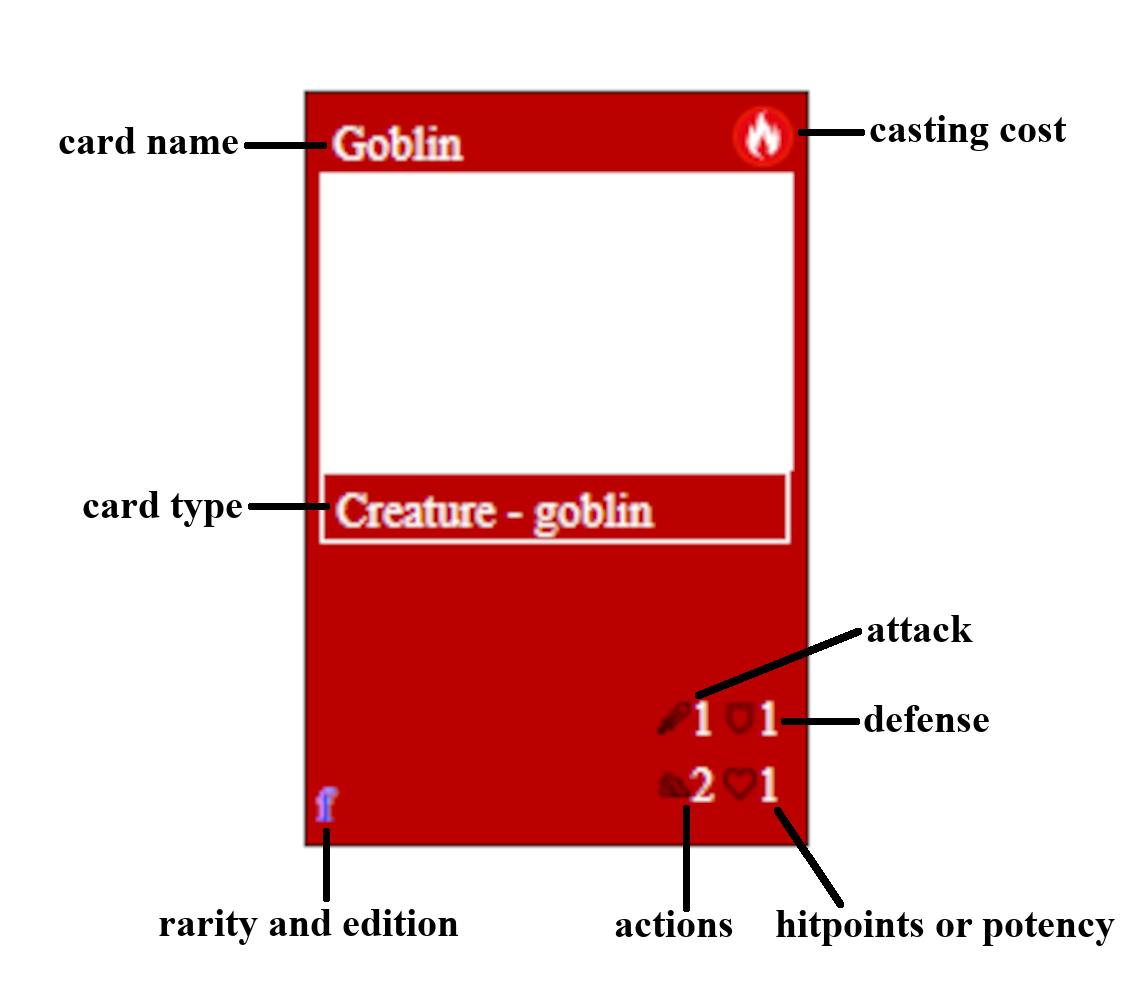 
Map has 2 Flags. Flag is a starting point of the game and the game ends (you lose) when opponent's board card enters your Flag. Map has also Center Point and at the end of each turn, if a player occupies Center Point with any board card, she/he adds one to his Winning Dice. When a player has 12 points on Winning Dice, she/he wins the game.

4.1) Energy Phase
If there's no card in active player's library, the player skips this phase. At the beginning of the Energy Phase, active player puts 1 point on each building he controls. No player can cast any spell or activate any ability in this phase before or after the points are put onto buildings. Abilities, that trigger during this phase, go to the stack, but the stack doesn't resolve, it is passed to next phase.

4.2) Actions Phase
At the beginning of the actions phase, the player removes all Action Dices from all board cards she/he controls. Then she/he puts an Action Dice to each board card which has third parameter (actions) higher than 0 with corresponding number. No player can cast any spell or activate any ability in this phase before or after the actions are set. Stack and abilities, that trigger during this phase and go under the stack, don't resolve, they are passed to next phase. These abilities are put UNDER the stack from Energy Phase.

4.3) Draw Phase
Active player draws a card. If there's no card in that player's library, the player skips drawing a card. Drawing of card goes UNDER the stack, players can react and resolve both before and after card drawing. Players can not attack, move, cast sorcery, creature, building, artifact and enchantment spells during this phase. Players may cast wizardry spells and activate activated abilities (if not stated otherwise).

4.4) Main Phase
Active player may attack, move, cast wizardry, sorcery, creature, building, artifact and enchantment spells, activate activated ability or pass to the Cleanup Phase during this phase if the stack is empty. Opponent must pass too. If the stack is not empty, she/he may cast wizardry or activate activated ability. Everything goes to stack (top of the stack). For details for attack and motion, read below.

4.5) Cleanup Phase
At the beginning of the cleanup phase, all action dices are removed from all board cards. No player can cast any spell or activate any ability in this phase before or after the actions are removed and put onto board cards. Triggered abilities that trigger in this phase go to the stack, but the stack doesn't resolve. It resolves in the End Phase.

4.6) End Phase
If active player occupies Center Point, she/he adds one to her/his Winning Dice. If the Winning Dice has 12 set, the player wins the game. This goes under the stack and players may respond both before and after resolution of that. Players can not attack, move, cast sorcery, creature, building, artifact and enchantment spells during this phase. Players may cast wizardry spells and activate activated abilities (if not stated otherwise).


There are multiple card types in the game. Wizardry cards and activated abilities can be played (if not stated otherwise) as a reaction to some spell or action. Actions and spells are declared and the active player gets priority. If he/she passes, the priority has opposing player. Spells/actions resolve from the last played. There are sorcery speed actions and spells that can be played only when the stack is empty and only during player's turn - main phase. Wizardry speed actions and spells can be played during opponent’s turn too. To cast spells player uses Energy Pool. Each point removed from building adds one energy to Energy Pool (if not stated otherwise on the building). Player must fill the Energy Pool with energy before casting spell or activating ability that utilizes energy from the Energy Pool. At the end of each phase, the Energy Pool is emptied.

One picture explains more than 1000 words. Activity is declaration of move, attack, counterstrike, or spell to the stack. "Resolve" resolves top activity of the stack.

6.1) Move
During active player's Main Phase the player may spend 1 energy of any colour from the Energy Pool and 1 action from Action Dice to move a board card to the adjacent hex. Move goes to stack and happens as it resolves.

6.3) Ambush
When a creature attacks, other creatures may join the combat if they share the target. Each creature removes one from Action Dice and is paid with one energy. Attack and Defense numbers of creatures are added together and they fight as one creature. Declared counterstrike is against only one of the creatures, against common added Defense number and if it’s sucessful it lowers points of only selected creature.

7.2) Haste
If the board has the ability Haste, it enters the battlefield with Action Dice set to it's actions (third number).

7.4) Regeneration
If during the draw phase the creature with regeneration has fewer points than it's initial points, add one point to it.

7.5) Mill
To mill means to put top card of deck into graveyard.